What is a Cenote? (And, are there any in Mérida?) Cenotes are natural pits or sinkholes.

When limestone collapses, it creates pits to expose fresh groundwater. Most importantly, cenotes are a source of potable water. These underground sinkholes have long been the primary source of water for the region. Ancient Mayans also revered some cenotes as sacred wells. Using sacred cenotes in their rites, the Mayan believed these pools were gateways to the afterlife.

While there aren’t any in Mérida proper, there are numerous in the Yucatan Peninsula within a short drive of Mérida’s city center.

Cenotes are hidden gems of the Yucatan Peninsula

Cenotes are popular with tourists and locals. Visitors use these natural fresh-water pools. You’ll find swimming, snorkeling, diving, and exploring. Not surprisingly, no two cenotes are alike. Some are completely hidden. Some are in the middle of town like Cenote Zaci in Valladolid.

You will feel transported in time when you visit or swim in the mineral-rich waters of a cenote.  You can also explore magical caves or relax under a jungle-framed sky. There’s no better place to cool off from the weather in Mérida than a cool (or even cold) cenote. 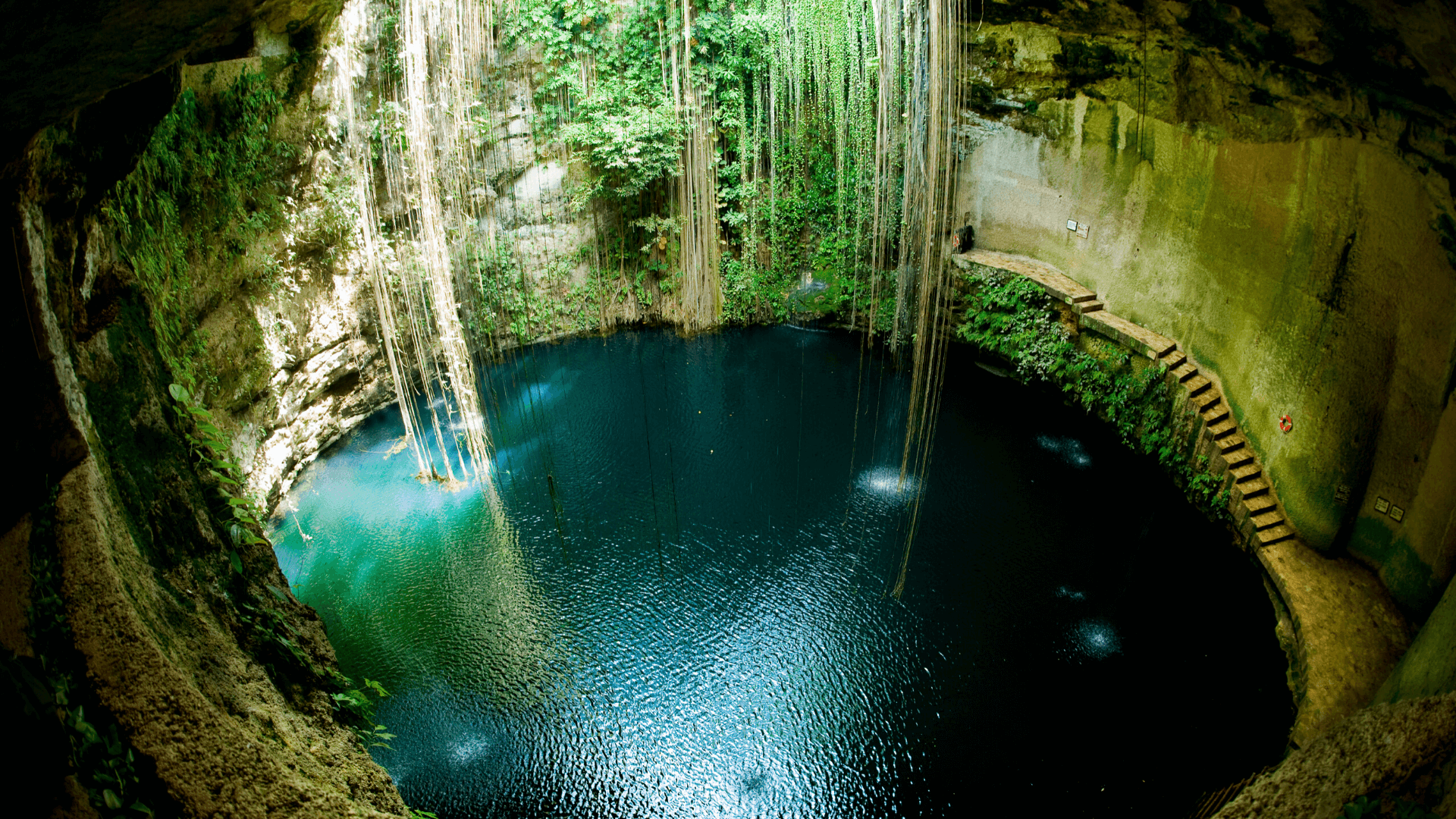 The pronunciation of Cenote is SEH-NO-TAY derived from the Mayan word dzonot meaning “well”.

Above all, there are different shapes and sizes of cenotes that exist. You’ll find some cenotes are deep water-filled shafts with vertical walls. Likewise, others are shallow and wide. While others are semi-open where a portion of the water is hidden inside a cavern. Still, others are entirely cavernous.

Most common types of Cenotes

The most common types of cenotes are:

How Cenotes were formed

Over 66 million years ago, an asteroid crashed into a place called Chicxulub on the coast of the Yucatan Peninsula. The impact of the energy release was substantially more than the atom bombs of Hiroshima and Nagasaki. The damage altered the limestone in the area making it more susceptible to erosion. The impact also led to a chain of catastrophic events.

Most notably, being linked to the extinction of the dinosaurs. 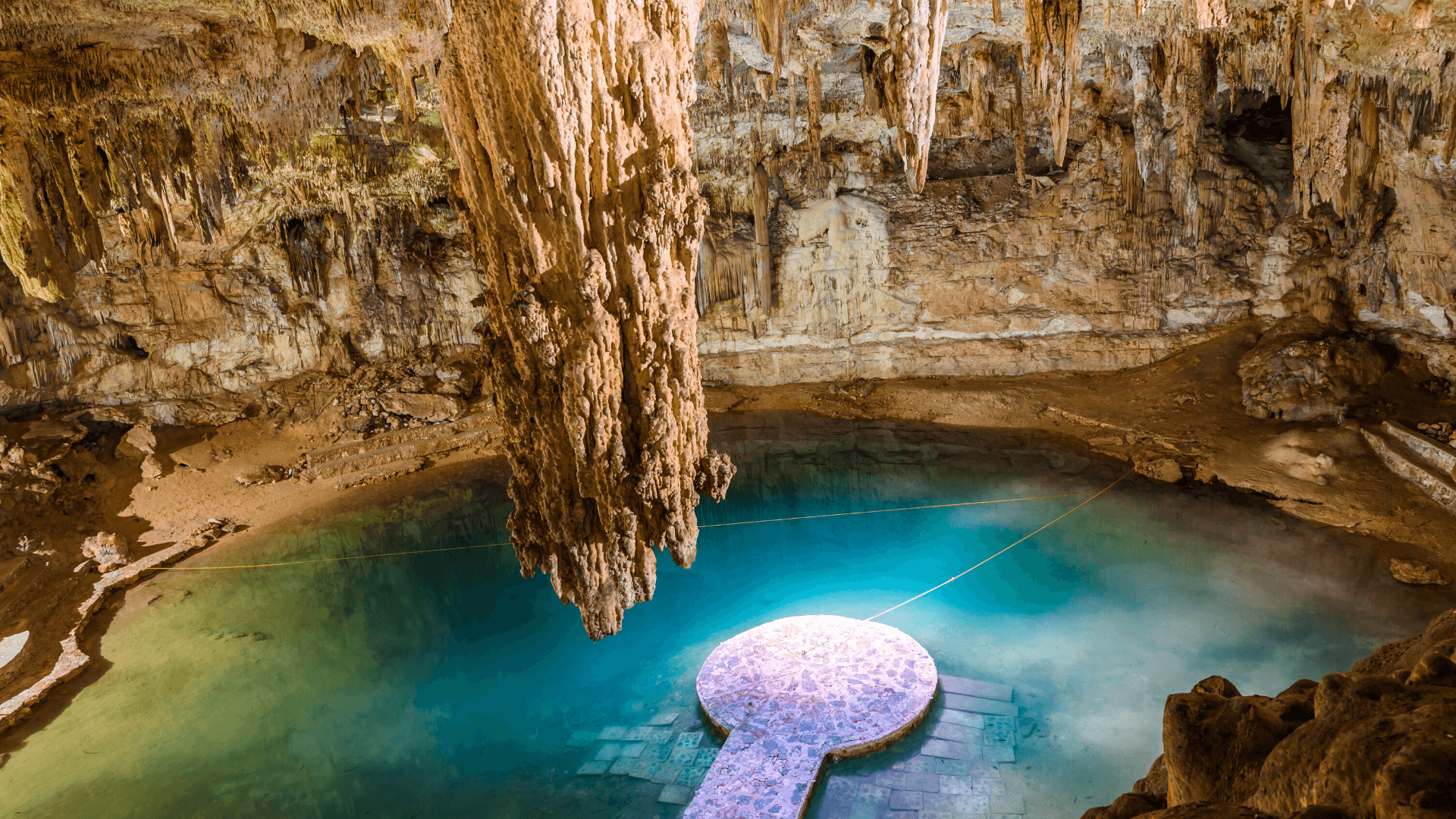 The Ring of Cenotes in Chicxulub Crater

While the beautiful Ring of Cenotes was created, it was at the expense of this devastating event. Cenotes also provide access to underground cave systems which are largely unexplored. Sistema Aktun Hu, the second-longest cave system in the world, is accessed via the Grand Cenote near Tulum. While two of the top five longest cave systems are located in the Mexican state of Quintana Roo on the Yucatan Peninsula.

Mérida is very close to the Chicxulub Crater, so you will have many choices of cenotes to visit within a short distance.

One of the most advanced indigenous civilizations of the Mesoamerican continent were the ancient Maya. They migrated to the Yucatan Peninsula between 500BC and 250AD. Because the Yucatan was a region devoid of rivers and lakes, cenotes provided fresh water all year long. Freshwater cenotes had the ability to sustain large settlements where sophisticated societies were built.

Notably, the cities of Chichen Itza, Uxmal and Mayapan were all built in the vicinity of cenotes. Interestingly enough, Mayapan located approximately kilometers west of Chichen Itza had 40 cenotes within its city walls.  17,000 inhabitants were able to have fresh water from the cenotes inside the city.

Cenotes were the gateway to the underworld

Cenotes also played an important role in the Maya religious belief system. The Maya believed cenotes to be a gateway to the underworld called Xibalba. The god of rain, Chaac, lived at the bottom of these sacred wells. The Maya performed rituals and ceremonies at sacred cenotes to ask for rain and good crops.

The Sacred Cenote of Chichen Itza is probably the most famous. Located in the northwest portion of the Yucatan Peninsula, archaeologists have found ancient artifacts. Gold, jade, pottery, and human remains consistent with human sacrifice have been unearthed.

Other cenotes have produced human remains however all indications point to possibly an alternative burial place, in the Xibalba, so that the human could await the next cycle in life.

How were Cenotes found

“The discovery of golden sacrificial artifacts in some cenotes led to the archaeological exploration of most cenotes in the first part of the 20th century,” is the information on many online sites. An American diplomat, Edward Thompson, began the process of discovering the history and importance of cenotes. He started in 1904 with the Sacred Cenote of Chichen Itza finding human skeletons and sacrificial objects given to the rain god Chaac. Mayans needed rain to fill cenotes and to water crops and thus, made offerings to Chaac.

With this find, divers began exploring the underground sinkholes and caverns. In the first part of the 21st century, Arturo González and Carmen Rojas Sandoval discovered three human skeletons in the Yucatan. One of them, now named Eve of Naharon, has a carbon-date of 13,600 years old. Then, the dive team of Alex Alvarez, Franco Attolini, and Alberto Nava, explored a section of Sistema Aktun Hu. Fascinatingly, remains of a mastodon and a human skull were the oldest evidence of human habitation in the region.

While the exact number of cenotes in the Mexican jungle is unknown. There are over 7,000 cenotes with over 2,200 registered. At least 900 of these are a part of the Ring of Cenotes located near Merida.

Chicxulub Crater – the creation of cenotes

The Chicxulub Crater derived its name after the village close to its center. It spans over 110 miles wide with approximately half of it resting below the Gulf of Mexico. Chicxulub Crater was unearthed in 1978. Glen Penfield, a geophysicist, noticed the unusual features. He observed a semicircular arc suggesting the presence of an impact crater. A few years later, controversial articles published by others suggested a large impact from an asteroid caused the mass extinction of the dinosaurs.

Cenotes and the extinction of dinosaurs

Dating back to the Cretaceous and Paleogene geologic period, the Chicxulub Crater is approximately 66 million years old. Subsequently, this meteorite impact caused the mass extinction of the dinosaurs. The impact also triggered earthquakes and volcanic eruptions around the world, sadly. Global firestorms occurred and the sky darkened from the cloud of dust that covered the Earth blocking sunlight and preventing photosynthesis for many, many years.

The most telling features from this impact are cenotes which dot the crater’s edge.

Finally, in 1990, Chicxulub served as the remains of the catastrophic event. Drilled samples taken from the site determined the crater’s age. These properties confirmed the predictions originally thought. The impact the size of the Chicxulub Crater occurs on Earth about once every 100 million years. This event serves as a reminder of the fragility of life. 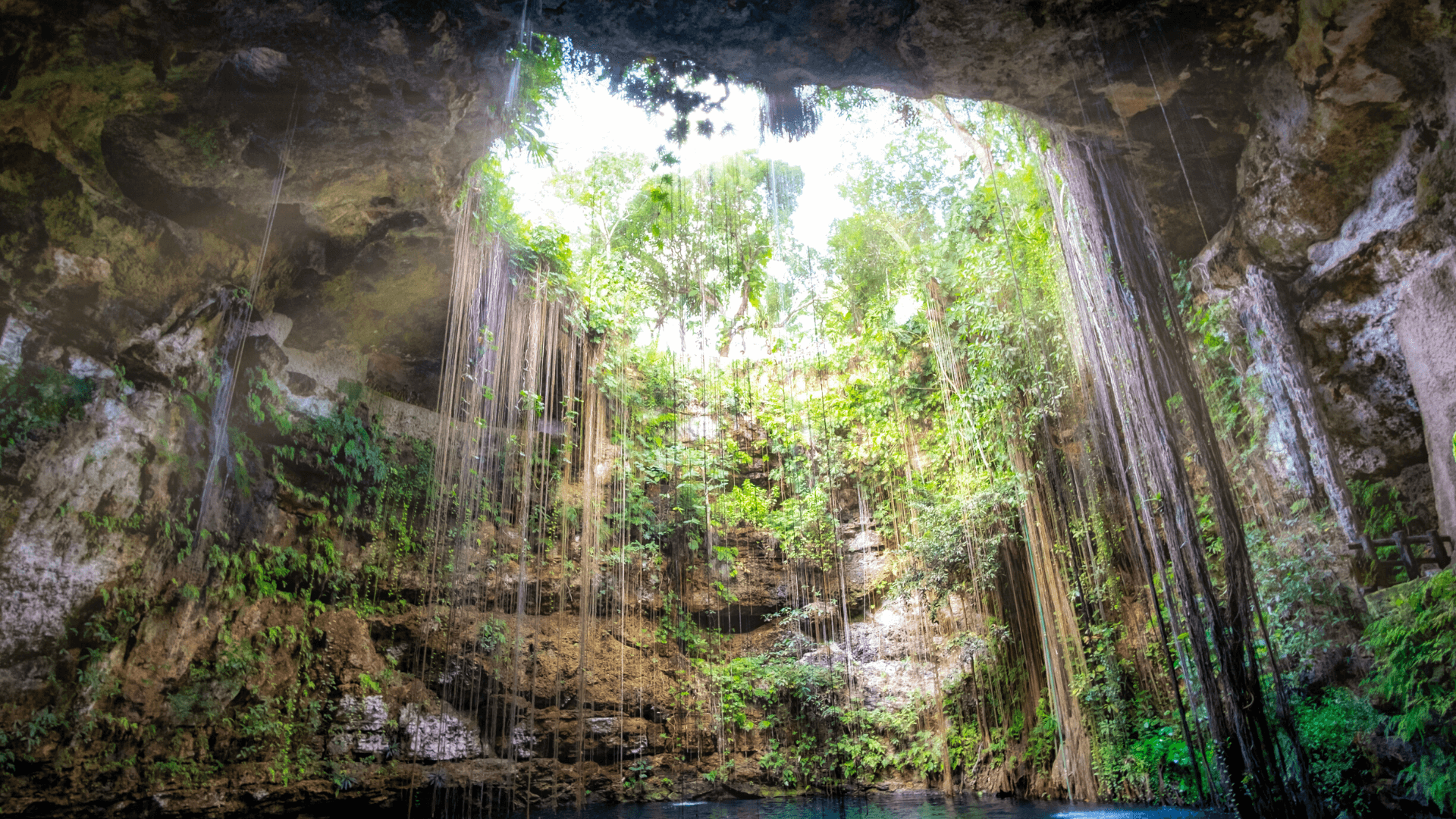 If you want to stay closer to Mérida, check out more cenotes here.

What to bring for a Yucatan cenote adventure

Be sure to leave all your valuables at home. But if you forget, be sure to remove your jewelry first! You’ll find most cenotes have entrance fees between 100 – 150 pesos per person – cash only, of course. Most will have changing facilities as well as equipment for rent including flashlights, life vests, and snorkeling equipment. You may even find bicycles for rent at the cenote or close-by to explore the surrounding area. Depending upon where you are, snacks may be available to purchase as well.

More things to do in Mérida on a budget or great restaurant options. Join more expats, visitors and residents of Mérida here.

Final thoughts on What is a Cenote?

It’s true, Mayan villages were around underground spiritual wells. The Maya had the belief they were a portal to the underworld and a connection with the gods. Cenotes served many purposes for the Maya.  Today, they do the same for us.

Whether you are just starting your cenote journey or you’ve known about cenotes for many years. I highly encourage you to visit the cenotes in the Yucatan Peninsula close to Mérida. You’ll find cenotes all over the world. However, the Yucatan Peninsula and the Riviera Maya are unique due to the sheer number and type of cenotes.

So, visit a cenote soon. Immersing yourself in the clear, pristine water while enjoying the sunlight and views of the jungles will transport you in time.