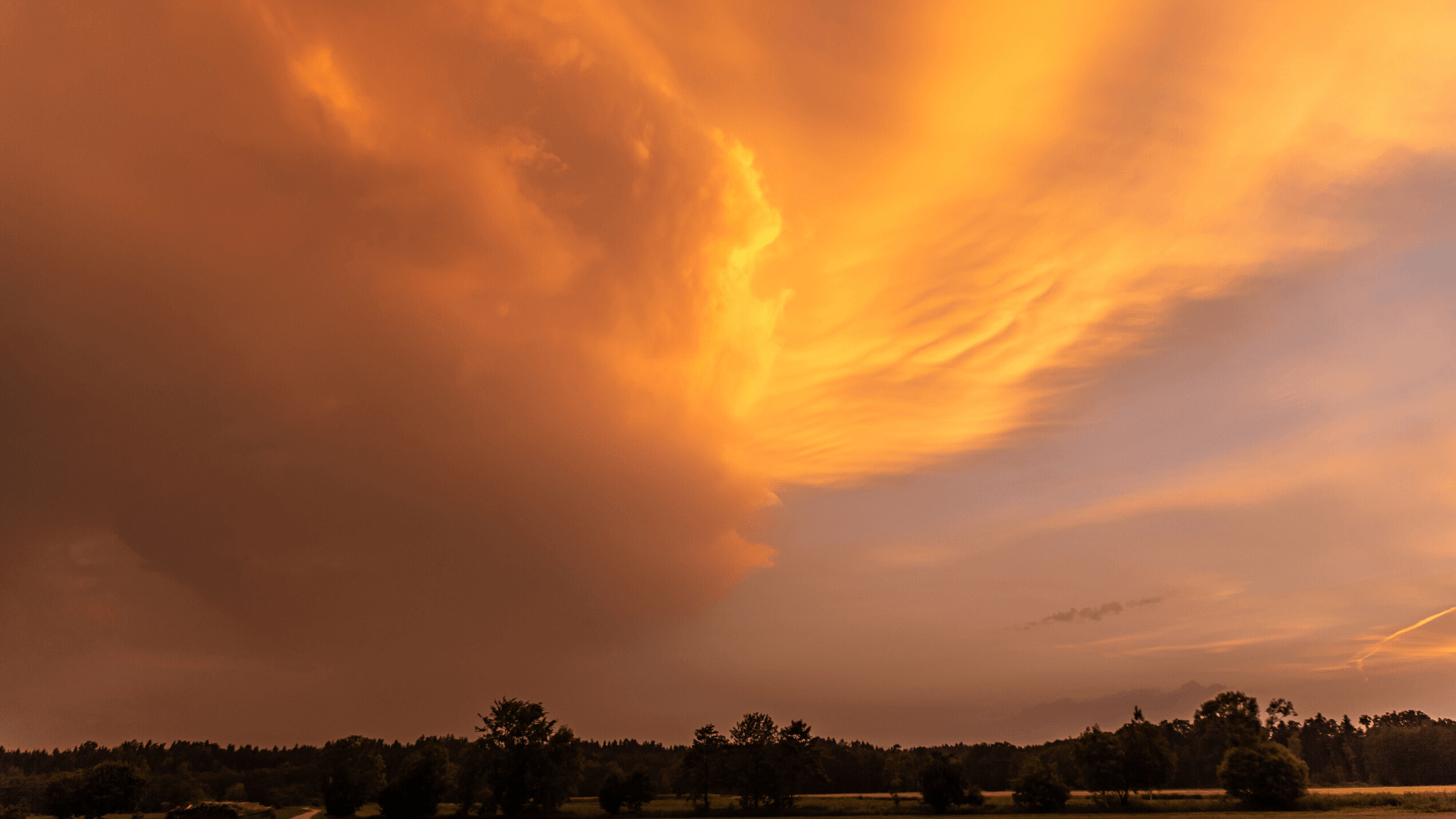 Growing up in West Texas, dust storms were common. Every spring the dust would roll in turning the sky orange, sticking to my lipstick and blanketing everything inside and outside with a fine coat of powder. I was used to it but I never thought I would be in another dust storm, especially in Mexico. Even though I’ve never had allergies, now I have summer allergies in Mérida Mexico.

Living in another country has exposed me to a plethora of information, which I love by the way. I enjoy learning new things, understanding how things work, and, most importantly, discovering the unknowns. Many of these I would never, ever know about unless I lived in Mérida. After massive research about my runny nose, itchy red eyes, and scratchy throat, I finally found the surprising culprit.

The history of Sahara dust

Every year, Saharan dust floats through the air from mid-June to mid-August for the Sahara Dust season. 182 million tons of dust depart from the western Sahara Desert and travels across the Atlantic and Caribbean.

This giant dust cloud is part of an annual migration that I was never aware of until experiencing it first hand. No wonder I had summer allergies in Mérida Mexico! Animal migrations are common however this is considered a mineral migration.

Researchers report that the dust provides necessary fertilizer and minerals like iron and phosphorus for creatures large and small including ocean and sea algae, coral, and living organisms in the Amazon.

Wind storms begin in the Sahara and sweep enormous “plumes” of desert dust thousands of feet above the Earth’s surface. These plumes turn to wisps of dust thousands of miles long. The wisps then travel west on trade winds across the Atlantic and Caribbean.

What is the path of Saharan dust?

An atmospheric science lesson is the best answer to this question.

The Sahara contains the most minute specks of dirt to coarse sand or in scientific terms, particulate matter. Of course, none of this matter is anchored to the ground and the Sahara is dry and hot. By contrast, to the south closer to the equator, it’s much cooler and wetter with rainforests that have trees blocking wind and firmly anchored to the ground.

The difference between the two extremes of hot and dry in the north and cool and moist in the south establishes a strong wind circulation. The conflict between these two atmospheric regions creates the plumes of desert dust that blow across the Atlantic.

The most interesting part . . .

“Saharan dust transport across the Atlantic Ocean to South America, and beyond to the Caribbean Sea is the largest transport of dust on the planet. Dust clouds from the Sahara Desert are often so big they can be seen from space. Space station crew members frequently report seeing Saharan dust masses as very widespread atmospheric haze,” according to the National Aeronautics and Space Administration (NASA).

The impact of Sahara dust in Mérida Mexico

The wind blows strongly over deserts in many parts of the world. The wind whips up the dust and sand propelling it high into the sky. When winds in the upper part of the atmosphere blow a certain way, the dust can be carried for thousands of miles. The dust can be transported worldwide. This is how it arrives in the Yucatan and more specifically, Mérida.

The typical blue skies in Mérida become more overcast, hazy, and even milky. The sunsets and sunrises are incredibly stunning with a multitude of colors painted in the sky.

These images are from dust particles causing the sunlight to scatter in various patterns across the morning and evening skies.

From my personal experience, it is quite a magnificent sight to see; quite surprising and unexpected. I thought the sky would be a tannish color and the rain would bring a dusty smell. However, the more I am outside during certain times of the day, the more my summer allergies in Mérida Mexico become aggravated.

The sky has a more reddish hue during sunrise and sunset. It’s quite beautiful in the sky this time of year. According to my research, “these outbreaks move off the African coast every 3-5 days during late spring to early fall”.

More dust comes from the Sahara desert than any other desert in the world.

Not surprisingly, the Sahara desert is the world’s largest hot desert. In fact, so much dust is scattered across the world from the Sahara that it can, in fact, alter the climate. Many factors come into play with where the dust is deposited including areas where pollution is prevalent. Pollution levels are affected by the dust as well.

So yes, the dust does, in fact, affect climate change.

While Sahara dust is present, rain collects dust particles on their journey from the sky. As rain falls, a layer of dust is left behind. Additionally, these large dusty-looking clouds also suppress hurricanes. The dust acts like a sponge to soak up moisture present in the air. It can create sinking air patterns to change the wind direction to alter small hurricanes before they become larger.

These clouds may look disastrous but they have a silver lining to help diminish gale force winds and rains of hurricanes.

One of the main features is very dry air. When dry air occurs in the middle of the atmosphere, it makes it difficult for the formation of hurricanes to occur.  Because the Saharan dust storm also has very strong surges of air, known as wind shears, these can also hamper the development of storms.

3 components that help suppress a hurricane include:

These elements hinder the development of clouds. In the case of wind shear, it can even destroy the structure of the storm. Newly-forming hurricanes decrease due to the storm fighting power of dust. Researchers believe that the dust itself suppresses the formation of clouds which in turn prevents tropical waves from intensifying.

Influences of Sahara dust on the Amazon & beyond

Saharan dust serves a most important function in the Amazon Basin. Rich in phosphorus, the dust contains this crucial nutrient for plant growth.

The soil in the Amazon loses as much as 90% of its phosphorus due to rainfall
and then the rivers carry it out to sea.

The decomposition of leaves and plants helps recycle some phosphorus. However, dust provides an external source of the nutrient. The biodiversity of the Amazon would most certainly experience adverse effects without this continuous source of phosphorus from the Sahara.

43 million tons of dust settles over the Caribbean Sea which greatly affects air quality and the air we breathe.

The phytoplankton of the Caribbean feeds off of the iron that also gives Saharan dust a rich red color. The coasts in its path including Mexico’s Yucatan and Riviera Maya as well as the southeastern United States receive oxygen produced by the Caribbean phytoplankton.

Sahara Dust in Mérida Mexico is an annual event

Sahara dust in Mérida Mexico happens every year. This year the dust cloud is incredibly large making it special. Even though its impact is different, it is a historic amount of dust according to some.

“In terms of concentration and density and size, it is the most dust we’ve seen in 50 or 60 years,” says Pablo Méndez Lázaro, who researches environmental health at the University of Puerto Rico.

While the current plume is particularly dense, there’s another one on the way.  The African desert is now releasing another traveling across the Atlantic and will arrive soon. More could be on the way throughout the summer and hurricane season.

Now I know I’ll have to prepare in advance for this annual event. One product I’ve found that helps tremendously for my eyes is chamomile eye drops or Manzanilla Sophia. They come in a small white bottle with a green label and chamomile flower logo. You can find them everywhere. They’ve been a life saver!

What an incredible environmental event to witness Sahara dust in Mérida Mexico. Along with tropical storms, possible hurricanes, weather, and more, the Yucatan Peninsula has so many things to experience. I know that these environmental events can be incredibly destructive causing personal and professional damage. But seeing and being part of a community that sticks together through thick and thin and through storms and sunny weather is quite impressive.
Notably, on most days, I’m at a complete loss for words at the strength and determination of this culture to overcome adversity and rise up stronger than ever. Its nothing less than inspirational. I feel joy every single day knowing this is my life in Mérida which brings something new, exciting, exhilarating, and even a little daunting every single day. Red eyes for a few weeks?  Completely and totally worth it.
I love this statement from Attish Kanhai, Research Officer at the Institute of Marine Affairs:  “Our visitors from the Sahara are more than simply dust blowing in the wind but are responsible for a very important moment in the history of the planet’s biodiversity. Without Saharan dust, in the blink of an eye, this moment could be gone.”