Where is Mérida Mexico on the Map? Mérida is not as widely known as Tulum, Playa del Carmen, Cabo San Lucas, Cancun, or Puerta Vallarta so you might be wondering where is Mérida Mexico on the map? This article tells you exactly where Mérida is located and all that you need for your next visit.

Mérida is in the Yucatan Peninsula

Mérida is located in the State of Yucatan, Mexico. With a population close to 1,000,000. It is the biggest city in the state and also the capital. Just 3 hours west of Cancun, you will arrive in Mérida. Once you find where is Mérida Mexico on the map, you’ll know more about the specific location and details.

The Yucatan Peninsula separates the Gulf of Mexico from the Caribbean Sea. It also encompasses 3 Mexican states and parts of Belize and Guatemala. Out of the 3 states found in the Peninsula, Quintana Roo is probably the most popular. Cancun, Tulum and Playa del Carmen are all mega-destinations for thousands of tourists annually.

This page contains affiliate links which I make a small commission from so I can buy a coffee at my favorite local coffee shops in Mérida!

Have you heard the nickname – The White City?

But when you experience the city itself, you will be able to determine why it’s called the White City.

The layout of the city is on a grid system

The center of Mérida is fairly easy to navigate, once you understand the layout; on a grid with numbered streets. Larger through streets have names such as Paseo de Montejo, Ave. Cupules, Ave. Itzaes or Ave. Colon.

Larger, even numbers begin in the west, reducing as you travel east.

Larger, odd numbers begin in the south, reducing as you travel north.

Each neighborhood has its own set of address numbers. For example, you will have a Calle 41 in several different neighborhoods. To reduce confusion, you will use the additional street numbers along with the zip code. 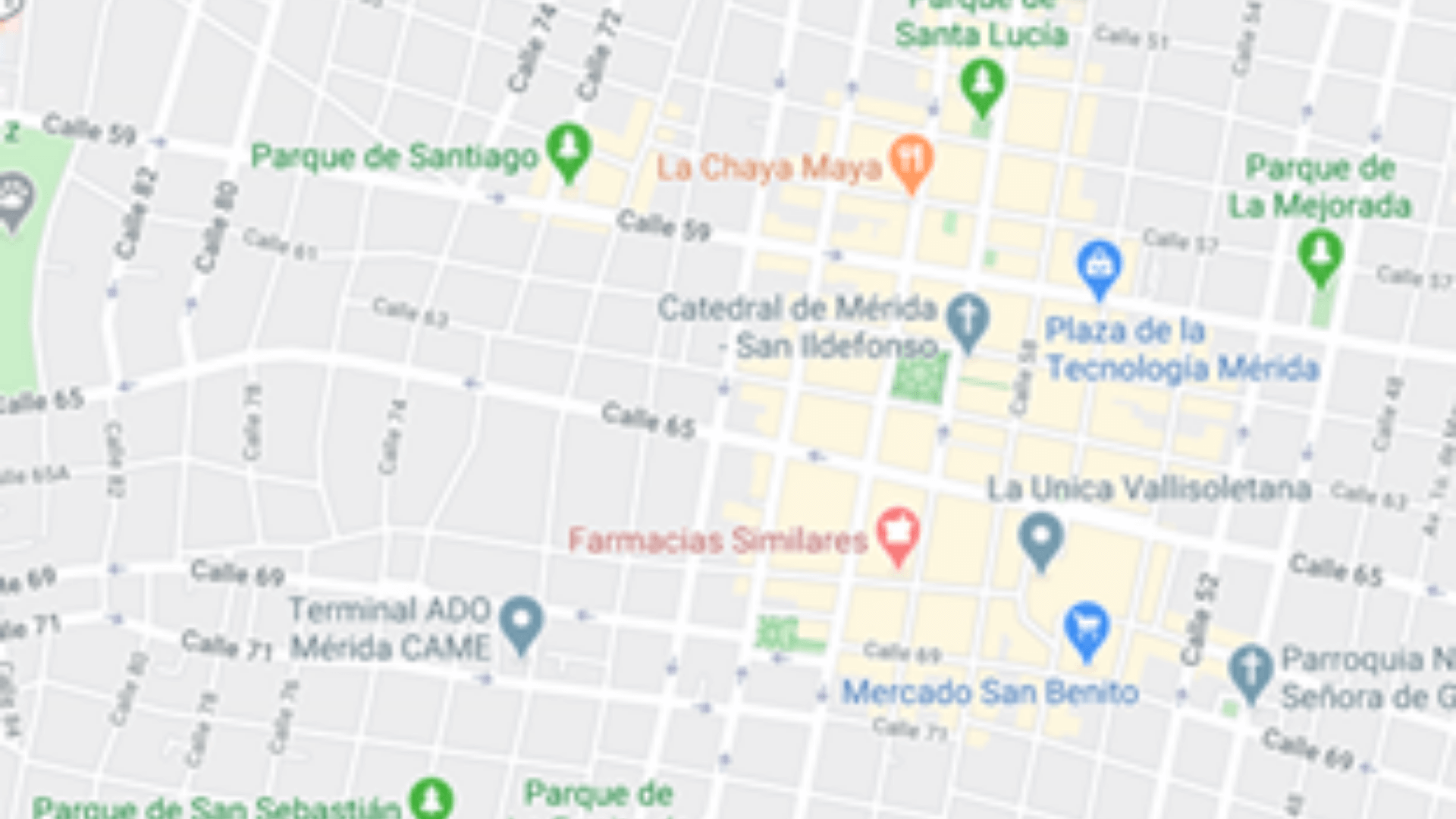 Google maps is a valuable tool for navigating streets around Centro.

You will need to verify that the Calle 41 you need is between 80 and 82 for the correct destination.

There are many one-way streets, notated on the street signs or by how the cars are parked.
Look for street signs. You will find the neighborhood and the zip code listed.

Centro which is in the middle of the city will simply say “Centro”. Others will say Col. Garcia Gineres 97070 or Col. Yucatan 97115.

The city center or Plaza Grande is considered The Downtown area. This central plaza is located between 60 and 62 and between 61 and 63. You may also find that the address’ numbers do not run in consecutive order.

Remember, you need to have all three parts of the address to find your destination. Occasionally, you will see addresses with letters as well. If you are unable to find your exact address, keep walking a block or two and I guarantee you will eventually find it.

The Esquinas de Merida, the old addresses of the city

Spanish colonists who settled in Mérida laid out the city as a numbered grid. Many early residents found meeting at “36/61” was a very confusing way to navigate.

Originally, residents used landmarks like churches or parks to give directions. For simplicity, almost every corner in the historic center of Mérida was given its unique name.

Savvy business owners erected pubs or shops with memorable names on the corners to capitalize on the trend. 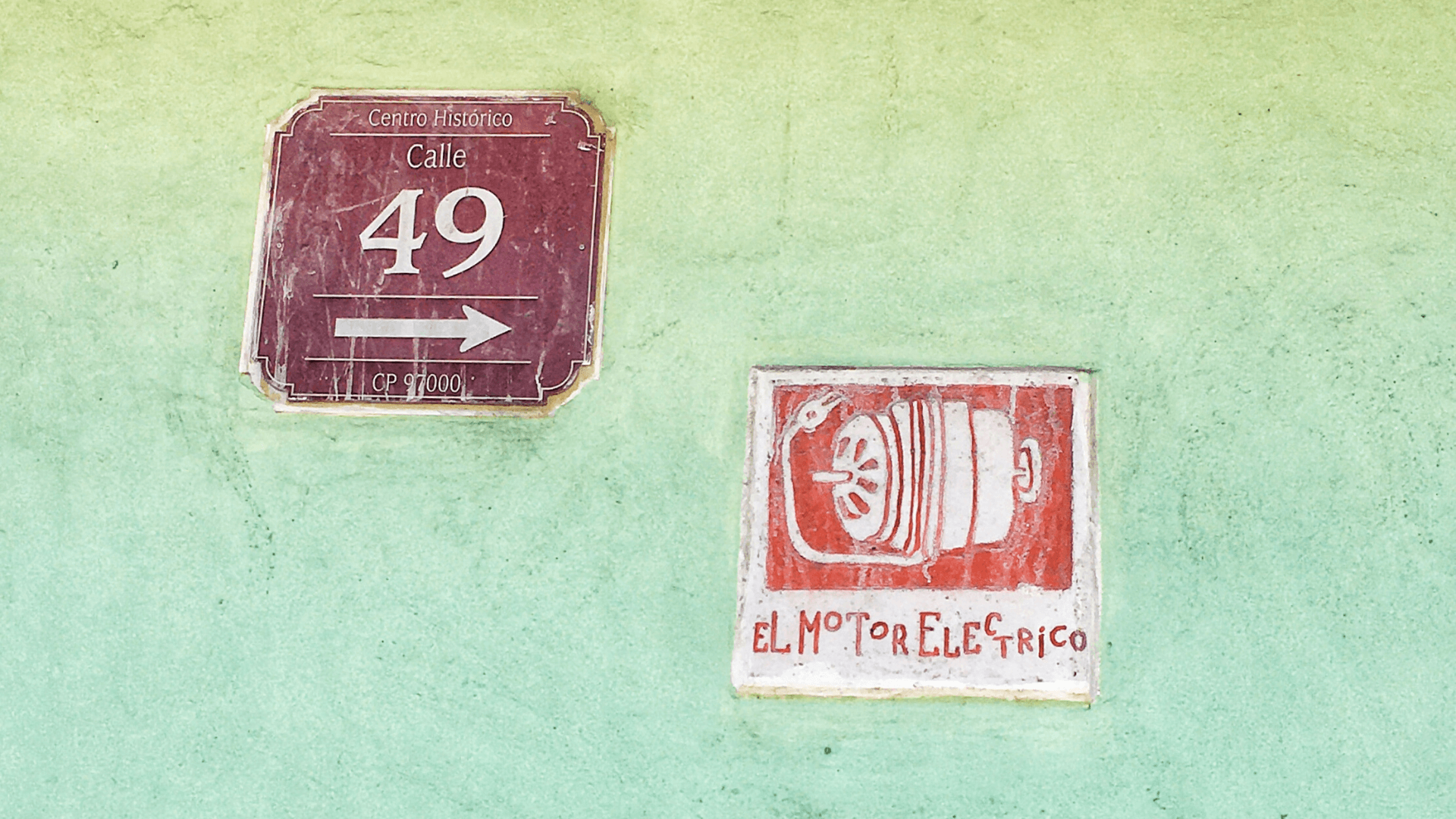 I love finding these plaques around Centro. Some better preserved than others.

Iconic red and white plaques installed on these corners included the name as well as a drawing or picture. Residents could plan to meet at “La Sombra” (The Shadow), or “La Sirena” (The Mermaid)” and even those who were illiterate, would know where to go.

The Esquinas de Mérida translates as the Corners of Mérida. Most of the plaques today are replicas however some originals dating back to the colonial period were preserved.

In 2012, UK born Bruce Edmiston spent a year in Mérida with his family and decided to identify the remaining plaques and their locations with a photographic record.

His photography includes some of the stories related to how the corners received their names; typically from unique events or related legends.

The “Dos Camellos” (Two Camels) corner got its name from two Arab merchants on camelback who carried out illegal trades at the shop on the corner.

Another corner (but the sign is missing) details the history of “El Degollado” (which roughly translates to the “Cut Throat”), about a brokenhearted barber who took his own life when his lover left him for the governor.

There are corners with curious names such as “El Chévere” (The Cool Guy), “El Salto de la Pulga” (The Jump of the Flea), “El Besito” (The Little Kiss), “El Mono Suelto” (The Free Monkey) and “El Autogiro” (The “autogyro,” a type of rotorcraft which uses an unpowered rotor), each with its fascinating backstory.

Mérida is a perfectly sized city for easy navigation

The colonial city of Mérida was once home to the greatest concentration of wealth in the world. The 19th-century sisal barons hired Parisian architects to build opulent villas along Paseo de Montejo. The Mérida version of the Champs-Elysées.

The historical centre or Centro has had a Unesco makeover with mostly swept cobbled streets and manicured gardens of the Plaza Grande. Notably, by learning where is Mérida Mexico on the map also helps you orient yourself to the local culture and flavor of this city.

It is truly the perfect-sized city filled with architecture, culture, arts, music, and, of course, restaurants.

On any given day, you’ll find live music and street vendors in the town square, while horse-drawn carriages click-clack through the cobblestone streets. You will see more Mexican families than foreigners riding the carriages through the streets. Part of the charm of Mérida? There aren’t an over-abundance of visitors.

Final thoughts on where is Mérida on the map

Once you have the basics I’ve shared with you, it is easy to get your bearings quickly.

A few final thoughts to help you travel with ease:

I hope this article provided a bit more insight into this topic before your trip here.

There is an open invitation for you to join my online community for more resources.