A Year Without A Home – Moving to Mérida, Mexico 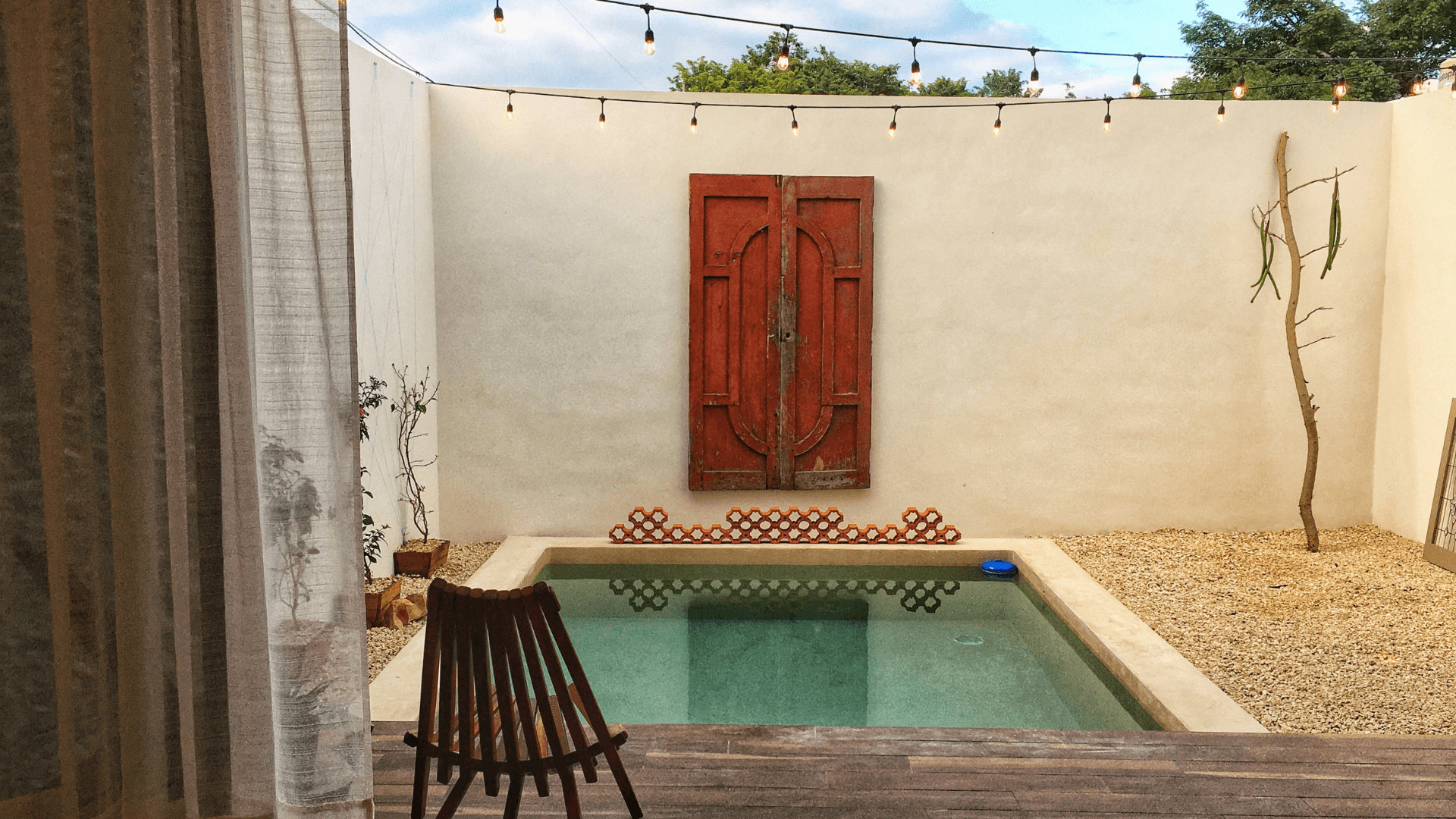 Today marks the one year anniversary of my move to Mérida, Mexico. Moving to Mexico had been a dream of mine since 2006. I knew I would have to wait until the right time to move. My sons were still in school. I was growing a business. Emotional and mental health were a priority after my divorce in 2010. I kept my dream alive by setting the intention to move when the time was right.  Patient and trust that the right time would come but my plans included a year without a home.

I truly believe that we all have hopes and dreams. Sometimes these are the only things that keep us going from day to day. Whether the dream comes true or not, it is something to hope for because we have nothing if we do not have hope.

The American way is to work hard while we are young, spending time and energy to make enough money to eventually retire. Sacrifice after sacrifice leads to success, wealth and happiness. But is that healthy? Does that contribute to a balanced life? So many times, life throws us a curveball that knocks us off course. The “things” we’ve worked towards can seem insignificant compared to a diagnosis of a disease or a death.  It happens to all of us at some point in our lives.

This was a pattern with my clients. They worked hard, saved money, sacrificed then retired. Finally came the time to realize their dreams. Some wanted a new house, many wanted to move closer to their children and grandchildren. Others wanted to travel the country in an RV, a few wanted to move to another country. Yet when the time came to make their dream come true, something would happen that would cause them to reconsider and change course.

Illness, death, disease, family matters and other issues became priorities in their lives. Their dreams continued to only be dreams, never becoming reality. Frankly, it scared me. After watching this happen over and over again, it became apparent I needed to do something different.

However, this pattern became prevalent in my life too. I would start to make plans to move and then something would happen. One day I realized something is always going to happen. It may be big, it may be small, but the one known thing is something will always happen. It’s just inevitable.

And then, came my wake-up call.

I had cancer for the third time in 2017. Then, just a year later, my dad received a diagnosis of cancer as well.

How long could I afford to wait to realize my dream of moving to Mexico? Would it take something else to make me pull the trigger? How much time did I have left?

Recognizing I could not wait any longer to make my dream of moving to Mexico a reality, I started planning and created a timeline. I had no idea where I wanted to move, I just knew I needed to start taking the steps to make it happen.

Merida was first on my list of five possible locations to live. I established a two year timeline to find my “spot”.  In my plan, I would need this amount of time to get my personal effects in order. Sell my house, finish my car lease, transition my business, obtain all my medical records, disperse my things, etc.

I arrived in Mérida in September of 2019 for a research trip. I fell head over heels in love with every single thing about the city. Well, maybe not the mosquitos or the super, intense heat of the summer. However, Mérida completely captured my five senses, my heart and my soul.

Spending time in Santa Lucia Park, I would get chills. My inner voice said, “This is your spot. Your new home is here. You don’t need to look anywhere else. Make your move as soon as possible.”

Not questioning my inner voice, my instinct or letting my head take control, I began to take the steps I’d carefully planned. Selling my house, transferring my car lease, donating, selling and (yes) even trashing some things. I knew part of the process would be a year without a home.

Notably, the Universe had a plan. All I had to do was follow it.

After I arrived in Mérida, it was the same. Everything was almost perfect. Of course, a few hiccups on the way like loosing my phone and computer (thankfully returned) after I arrived in Mérida. The Airbnb I rented looked nothing like the photos so I had to move after a week but I was able to find a great alternative. I was enjoying Merida to the fullest and loving every minute.

Then COVID happened and everything shut down in March.

The Mérida I fell in love with became another city entirely.

Not surprisingly, my world turned upside down. A new country, culture and language became almost formidable. The plans that my inner voice and the Universe brought to me did not include a world-wide pandemic. I became very ungrounded and started making decisions that went against my plans.

Stability became a priority no matter what the cost but I would not find stability for another 9 months.

At one very, very low point, I became overwhelmed. Every single thing took an enormous amount of effort. I became incredibly ill in May from the climate change, a new environment and different food. Not having a stable place where I could rest, relax and be comfortable was also taking a toll.

I began feeling the effects of a year without a home.

This had never even been a concern or a consideration. I prided myself in the fact that I was resilient and adaptable. I was a world traveler and had lived in London and the Riviera Maya. Yet, the instability of the world and, particularly, my immediate world were enormous.

We all know the saying “home is where the heart is” but I needed more than the sentiment of this simple phrase. Yes, my heart was in Mérida. However, the constant changes between living sitations and COVID regulations were causing anxiety and stress.

My pre-COVID plan included moving around the city, spending 2 – 3 months in each location. Ultimately, after 4 – 6 moves, I would know my final destination. I was prepared for a year without a home. But, because of the state of the world, I yearned to find my new home.

I would have many lessons (I don’t believe in mistakes) along the way.

My relaxing courtyard with dipping pool, all my own!

So the year 2020 seemed like an eternity filled with challenges, difficulties and illness. I truly did not understand the adverse effect I would experience of a year without a home.

Several things were the cause:

Fortunately, I met a great guy (we are still together) who became the only stable force in my life. He was patient with my emotional ups and downs and helped me by listening. Most importantly, he was present when I needed him. There were many things I did not understand with the rules and regulations of COVID. Angel was there to navigate the ardous journey that would continue until December.

Strangely or not, I ended up in a place completely unexpected:  the north part of Mérida. This beautiful and quiet neighborhood is called Montes de Ame which translated means “mountains of love”.  I found a great realtor to help me find the perfect place. The townhouse I have here is very similar to my townhouse in Dallas.

After 10 moves in 12 months, I found my soft place to land, a safe-zone, and stability.

I was able to purchase my own furniture, decorate to my taste and don’t have to continually adjust to a new environment. Most importantly, my sense of curiosity and adventure have returned.

My year without a home brought many personal challenges to overcome, more patience than I’ve ever had and fortitude to accept that everything is temporary and the only thing that is constant is change.

I’m looking forward to starting the new year in a new home with new energy and positivity! 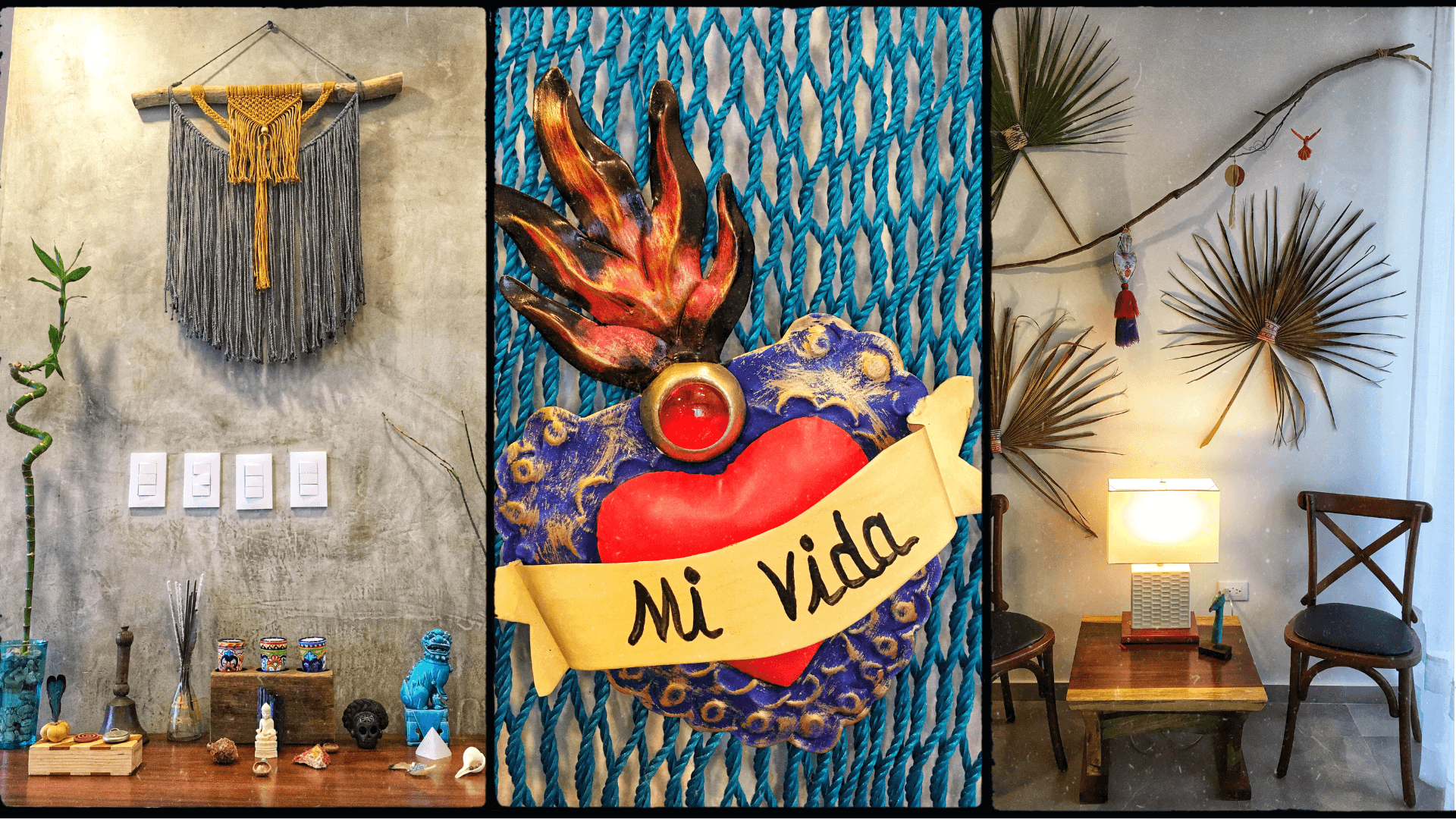 I am using “found objects” such as interesting tree branches and palm leaves. Local artisans are numerous and talented!

Connect with others who live in and visit Mérida in my Facebook Group – Life in Merida: Visitor & Resident Hangout